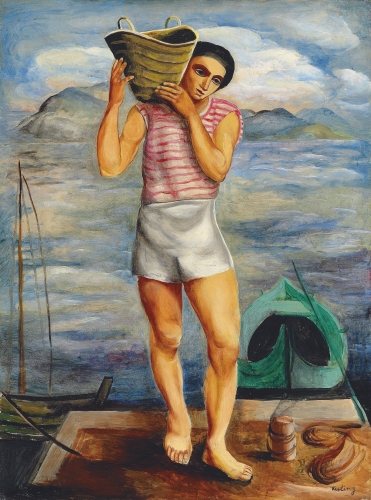 The Nahmad Collection is pleased to participate to the itinerary exhibition, Kisling, Grande Figure de l'École de Paris.
Kisling (1891-1953) was one of the representative painters of the École de Paris. Born in Krakow, Poland, he moved to Paris at age 19 after graduating from art school, and befriended numerous artists, including Picasso, Georges Braque, Modigliani, and Pascin during the years he resided in the Montmartre and Montparnasse districts. Although influenced by cubism at an early stage, he resisted the departure from reality seen in cubism and similar movements, and soon began to depict his subjects in a realistic style. An enthusiastic student of traditional styles of painting from Italy and Flanders, Kisling sympathized with the 1920s “return to order” movement.

Kisling developed a distinctive style of landscape, still life, and portrait painting, but his unique traits are most evident in his portraits. His refined realism, achieved through careful brushwork, and his use of glowing, sensual colors that imbue his canvasses with tranquility established him as one of the important artists of the École de Paris. This exhibition features around 60 works from the 1920s and 1930s, a period when Kisling became a darling of the Paris art world known as the “Prince of Montparnasse,” as well as works from the period when he was residing in the United States.