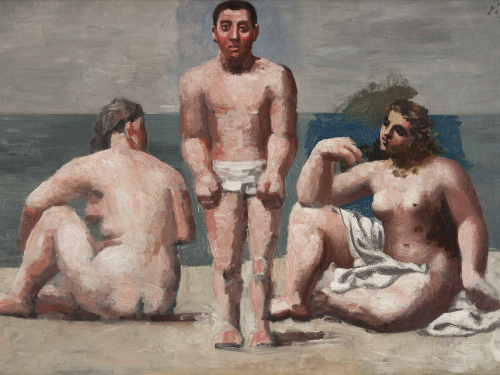 The Nahmad collection is pleased to participate to Picasso. Baigneuses et Baigneurs at the Musée des Beaux Arts de Lyon.

From the Woman Seated on the Beach, a painting by Picasso kept at the Musée des Beaux-Arts  (Museum of Fine Arts), the idea came for an exhibition on the theme of the bather, which often appears in the artist’s work.

The museum presents the works of several painters who influenced Picasso, such as Ingres and Renoir, as well as of artists who Picasso inspired in turn, such as Francis Bacon and Henry Moore.

The exhibition, organised jointly with the Musée National Picasso-Paris, presents 150 works from major collections in Europe and the United States, as well as from the archives, and photos of Picasso and his family on holiday by the seaside.