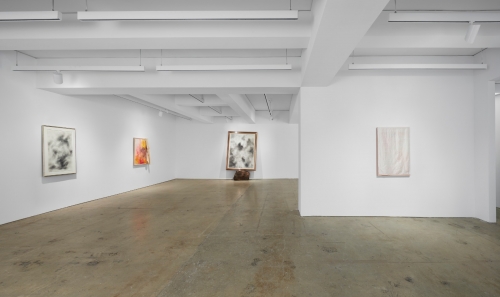 Nahmad Contemporary is pleased to announce David Hammons: Basketball and Kool-Aid, an exhibition dedicated to two radical series of works that the seminal American artist created between 1995 and 2012. On view from May 1 through June 25, 2021, this is the first in-depth presentation of either body of work, for which Hammons employed vanguard artistic methods and unconventional materials to create abstract compositions, parlaying his keen formal, material, and conceptual understandings into deeply compelling works of art.

Invoking the material concerns of Arte Povera and the conceptual investigations of Marcel Duchamp, David Hammons appropriates the ephemera of daily life to explore the cultural and societal subtexts inherent to materials, images, objects, and language. A consistent thread throughout his multifaceted oeuvre, which spans over 50 years, is an investigation of racial stereotypes, prejudices, and identities in the United States. As such, the Basketball (1995–2012) and Kool-Aid (2003–07) works explore constructions of race and the clichéd associations bound to black American experience and culture.

The delicate, grey-scale abstractions in Hammons’ Basketball drawings (1995–2012) belie their unorthodox means of creation, in which the artist bounced basketballs—often covered in “Harlem dirt”—onto sheets of white paper. The transformative mark-making is an allegory for the societal and monetary transcendence that the sport promises marginalized communities. Furthermore, the unpredictable trajectory of the dribbled ball on the surface summons the volatile and often chance-based path of many athletes who endeavor to reach NBA fame. Hammons first called attention to the sport’s encumbered symbol of opportunity for disenfranchised African American youths in the 1980s with public sculptural works such as Human Pegs/Pole Dreams (1982) and Higher Goals (1986) that feature unattainably tall basketball hoops.

In many of the works from his Basketball series, Hammons also incorporated found objects—ranging from a suitcase or alarm clock to a mound of asphalt or bricks—with symbolically loaded associations to the sport. The suitcase, for instance, can be interpreted as the luxury of travel afforded to professional athletes or as a pun on the game’s terminology of “traveling with the ball,” and the asphalt may reference the urban surface on which the sport originated. By transforming the works from two-dimensional framed drawings to sculptural entities, Hammons calls attention to the agency of art to do more than sit idly as a passive object of consumption.

To make his Kool-Aid works (2003–07), Hammons applied the popular powdered drink to paper in vibrant, explosive swaths of color, embellishing some with Japanese script that spells out the process for mixing Kool-Aid. While the visually appealing and sumptuous compositions evoke abstract expressionism and color field painting, they destabilize this tradition through their unconventional materials, which recall Ed Ruscha’s stain series and Andy Warhol’s oxidation paintings. Further, the Kool-Aid drawings are unmistakably rife with political commentary: the association of the inexpensive sugary drink with African American culture, and the phrase “drinking the Kool-Aid,” which stems from the “Jonestown Massacre” in which over 900 members of the Peoples Temple movement (many of them African American) died.

As in the Basketball drawings, these works include sculptural elements: silk veils that cover the surfaces of the works (to protect the fugitive Kool-Aid pigment from sunlight), and frames wrapped in colored terry cloth. These elements reflect Hammons’ affinity for the art of assemblage and found objects, and his particular interest in drapery and concealment, which can be traced from his earliest body prints of the 1960s to his recent tarp paintings (which he produced immediately following the silk-shrouded Kool Aid works.) His choice to incorporate fabric that obscures the composition speaks to his larger critique of the commodification and objectification of art.

Through unconventional artistic methods and media, both series evoke powerful political associations while demonstrating the artist’s ingenuity. The brilliance of these “sculptural” drawings, offering cultural symbolism and contemplative connotations, resides in their subtlety and elusiveness that ultimately provokes curious and reflective inquiry about the practices and beliefs shaping our identities.

Marking a particularly influential moment for David Hammons in New York City, this exhibition coincides with the Drawing Center's survey of his Body Prints (on view through May 23, 2021), as well as with the Whitney Museum’s unveiling of his monumental installation Day’s End (2021) on the Hudson River. Nahmad Contemporary will produce a comprehensive publication featuring various academic texts on the Basketball and Kool-Aid drawings in conjunction with the exhibition.

With thanks to Eleanor Cayre and Jacob King for their collaboration on the conception and realization of this exhibition.