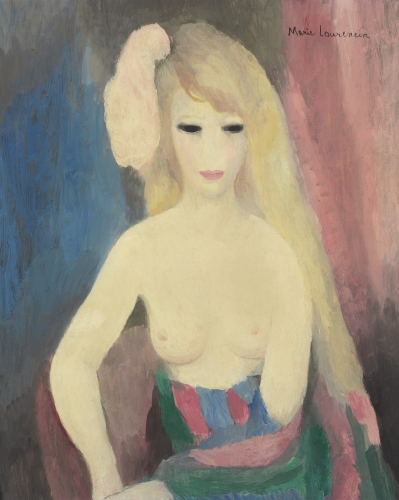 Nahmad Projects is pleased to announce an exhibition of paintings by Marie Laurencin, the ﬁrst solo presentation of her work in London since 1947. This selection of works demonstrates the genius in Laurencin’s vision of a self-sufﬁcient world of female affection and creativity. This exhibition seeks to celebrate Marie Laurencin’s qualities as a great modernist painter, her instrumental role in deﬁning the Art Deco style, and her inﬂuence on a generation of the Parisian intellectual elite. As a young artist, Laurencin rose quickly as a prominent ﬁgure within the Cubists. She sold her ﬁrst painting to Gertrude Stein and exhibited with Cubist group the Section d’Or in 1911. Yet her friendship with male artists and romance with Guillaume Apollinaire occluded historians’ ability to recognise her contribution to modernism. Many, including those closest to her, celebrated her feminine touch but balked at the notion of equal standing with her fellow male artists. Some, however, did notice her. Henri Matisse said of Laurencin in relation to her earlier connection with the Fauvist group: “She, at least, is no mere Fauvette.”   Marie Laurencin’s work is canonical in the history of twentieth-century painting, with contemporary art historian Elizabeth Otto hailing the artist as a “heroine of modernism” for giving form to female independence and to lesbian love and desire. However, this was not always the case. Her effeminate style – exempliﬁed in her choice of pastel colours and domestic settings – contributed to critics sidelining her work through “avoidance, blindness or denial,” in the words of Elizabeth Louise Kahn. Now, these very same qualities deﬁne Laurencin’s vision of the modern woman.

This exhibition showcases paintings from Laurencin’s mature period from the 1920s onwards. These reﬁned works are a window onto the artist’s world, customising avant-garde techniques to her own mission. In these mature works, Laurencin combines her exposure to modernist painting with a unique combination of references to craft a utopia for women beyond the reach of men. Neoclassical Sapphic iconography, Japanese literature and nineteenth-century Romantic symbolism play a game of hide and seek within her soft palette and abstracted forms. It takes a second glance to lift the veil, to uncover hints of a life hiding in plain sight. As André Salmon wrote presciently in 1912, Laurencin’s paintings are “too subtle to be simple.”   A highlight of the exhibition, Buste de femme aux seins nus (1926), depicts an artist model in vibrant clothes which reveal both breasts. While her frontal pose projects an airy sensuality, her wide black eyes arrest the viewer. Enlarged pupils recur in Laurencin’s portraits, and read differently on each face. Her eyes can sometimes read as feline, deer eyes, tribal masks, or human melancholy. Deux femmes aux rideau (1924) depicts a woman opening a curtain which at once conceals and uncovers another behind. The women here are derived from a combination of life studies and the artist’s imagination. Here we ﬁnd a conspiratorial atmosphere, of women making a space their own.

BIOGRAPHY   Marie Laurencin was born in Paris in 1883, where she was raised by her mother and lived most of her life. She began her education learning porcelain painting in Sèvres, then moved to the Acadèmie Humbert in Paris in 1904 where she met Francis Picabia and Georges Braque. Laurencin also met the American ex-pat lesbian writer Natalie Barney in 1904 and printed Chanson de Bilitis (1904), her ﬁrst erotic depiction of two women. In 1907, Pablo Picasso introduced Laurencin to Guillaume Apollinaire, and they embarked on a romantic and “cerebral” relationship which lasted until 1912. Laurencin became a notable ﬁgure within the Cubist group and exhibited with the Section d’Or at the Salon des Independents in 1910-11. In 1913, Laurencin signed a contract with the legendary art dealer Paul Rosenberg which lasted until 1940. In the same year, she married the German Baron Otto von Waëtjen. Soon they are exiled to Spain at the beginning of WW1 until 1919, and after a short year in Düsseldorf, Laurencin divorced and returned to Paris in 1920. From the 1920s, Laurencin became a distinguished portrait painter, illustrating several books, and designing costumes for the Ballets Russes. Laurencin was an active ﬁgure in promoting female creativity, exhibiting at the Societé des Femmes Artistes Modernes several times during the group’s existence between 1931-1938. She lived unmarried for the rest of her life, and bequeathed her estate to Suzanne Moreau, her maid and possible romantic partner, upon her death in 1956.   The Marie Laurencin Museum opened in Japan in 1983, becoming the ﬁrst museum in the world devoted to a single female painter. Recent retrospectives of Marie Laurencin were held at the Hangaram Museum in Seoul, from December 2017 – March 2018, and at the Marmottan Monet Museum in Paris, from February – June 2013. Works by Marie Laurencin are held in numerous museum collections including: Art Gallery of New South Wales, Sydney; Art Institute of Chicago; Chi-Mei Museum, Taiwan; Cleveland Museum of Art; Dallas Museum of Art; Fine Arts Museums of San Francisco; Hermitage Museum, St. Petersburg; Indianapolis Museum of Art; Los Angeles County Museum of Art; Musée d’Orsay, Paris; Musée Marie Laurencin, Tokyo; Museu de Arte de Sao Paolo; Museum of Fine Arts, Boston; Museum of Modern Art, New York; National Museum of Women in the Arts, Washington, D.C.; Philadelphia Museum of Art; Tate Gallery,